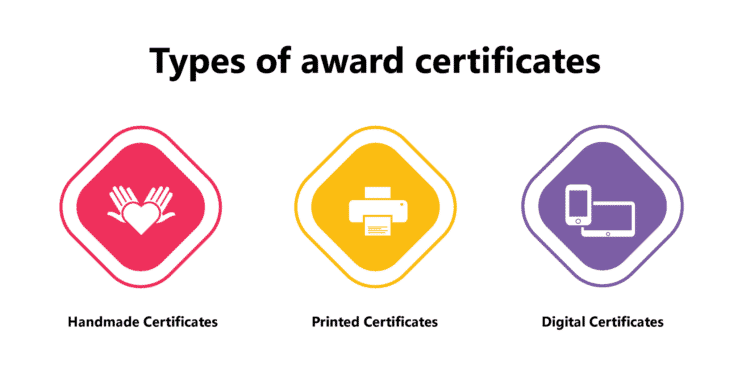 All you need to know about Award Certificates

There are various ways in which organizations recognize their employees and these practices have evolved over time. But, award certificate is one form of recognition that has stood the test of time.

How did award certificates come into being?

The Hawthorne experiment brought employee awards into existence. Award certificates came soon after in almost every business and industry. Award certificates soon became the best tools to appreciate employees and to make them feel more special. The award certificate may seem to be just a piece of paper but it holds immense emotive value for the recipient.

What are the different types of award certificates?

The original certificates we made on thick hand-made paper with the name of the employee written on it. At that time, the printers were not so advanced to print such certificates nor was there a requirement for a large number of award certificates.

The advent of printers revolutionized the award certificate business. After the 1980s the demand for printed certificates increased. Printers enabled certificates to be made very easily and at one-fourth of the cost of the handmade certificates.

The calligraphy and embroidery were replaced by the new fonts which were more attractive. The intensive manual labour of making a certificate by hand was replaced by machines that increased the output.

This was the third and the most recent wave in award certificates. After the 2000s, the millennium was ruled by computers. Internet and information technology developed rapidly, creating new start-ups that changed the rules of the game and disrupted the traditional practices.

Technology has enabled organizations to design and create award certificates that could be sent over email, consuming very little resources and requiring no or minimal manual effort.

The Relevance of Award Certificates today

The workload and stress levels of employees have increased over a period of time. An average employee today feels over-worked, under-compensated and demotivated in most organizations.  Hence it is imperative for organizations to keep their employees happy. Most organizations create a formal recognition policy with monetary or other benefits.

No matter what the value of the reward is, the award certificate still holds a lot of social and emotional value for the employee. For the employee, it becomes a status symbol that can be flaunted in front of their colleagues, whether it is physically or digitally.

The awards certificate is not just a piece of paper or attachment in an email for the employees. It is a critical part of the employee rewards and recognition program in every organization.

To stay updated on the latest HiFives blogs follow us on Twitter (@MyHiFives). Learn more about HR Best Practices on HiFives.

HiFives (https://www.hifives.in) is an employee rewards, recognition and engagement SaaS platform that enables organizations to digitize, automate and transform their employee experience. The platform enables supervisors and co-workers to nominate, recognize and reward employees using a points-based system. Budget management, jury-based evaluation and multi-level approval workflows are built into the platform. HiFives has social features such as a wall of fame and gamification features such as leaderboards, e-certificates and digital badges. It also has a global redemption system with country-specific e-gift card options. HiFives integrates with all leading HRMS systems, Office 365, Google Workspace, MS Teams, Slack and other popular tools used at the workplace. HiFives is used by many large enterprises, small businesses and startups across 25+ countries in the world, in many industries including manufacturing, retail, technology, financial services and media.